WHEN YOU PURCHASE, YOU SUPPORT A FULL TIME ARTIST......FREE SHIPPING FOR THE MONTH OF APRIL!

For the past ten years, Cyndi has curated art collections featuring unique pottery; one of a kind hand-blown glass; original landscape and abstract paintings; art photography; original hand-pulled prints; and hand-fabricated women’s jewelry.  You will love the art that she has selected for your daily life. Gifts given that will be loved for many years.  Cyndi believes that by having art in your life, it connects you to the artist, and enhances your day in unique, heart-felt ways.  An ever changing selection of unique art are below.  Thank you for shopping with us.  We appreciate it. 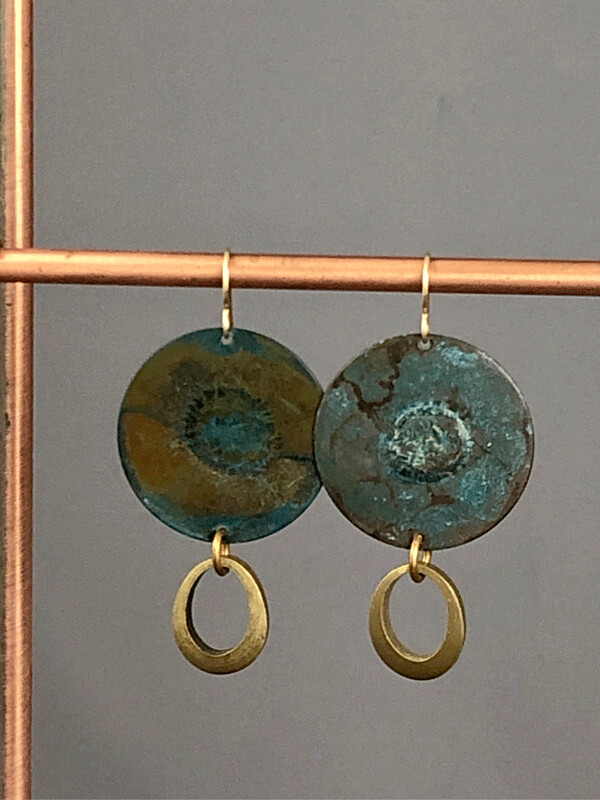 You will love these earrings! Mixed metals. Lightweight! Fun to wear. Lochlin Smith was born in Greenwich Connecticut. His father and mother were talented portrait and visual artists. Early in life, Lochlin realized that artistic expression and hand work were in his blood, and that 9-5 jobs were not. He attended a NYC college focusing on abstract painting.

In 1972, he left the intensity of the city and moved to Vermont. He set up a studio in an old barn and began sculpting and painting. After a few years, he found himself designing jewelry. He twisted, torched, pounded, and shaped bronze rods and sheets into unusual, one-of-a-kind earrings, bracelets, pins, and neckpieces.
Lochlin draws inspiration from his own Celtic ancestry, as well a from Aztec, Egyptian, and aboriginal artisans - reinterpreting, never copying, the visions of these ancient masters. The natural world has always captured and held his imagination as well, as evidenced by the organic twists and turns of the pliant metal.
Lochlin Smith Designs are available throughout the US at many fine art and craft galleries.
Save this product for later

What are you looking for?

site design:  Designs on the Grand